**For the new school year, 2012-2013, students in Room 121 created an updated version of Angry Verbs. CLICK HERE to check out the newest post--featuring tons of pictures and writing!

After being inspired by this Angry Verb bulletin board using the Angry Birds, I had my students review verbs as well by writing a sentence on an angry bird and underlining the verb/verbs.

During class project time on Monday (when some students were in Orchestra), a few students covered the door with butcher paper while several others began working on coloring the birds. Later on during Daily 5, students who were doing Word Work practiced finding verbs by creating their own Angry Verbs. 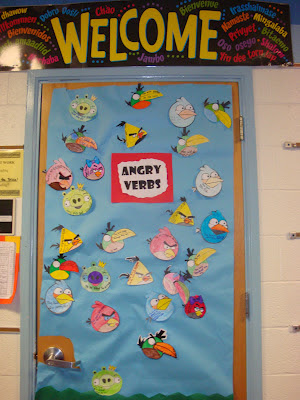 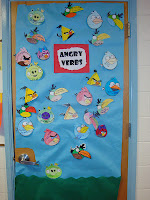 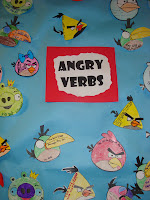 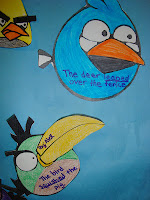 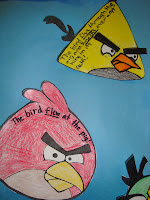 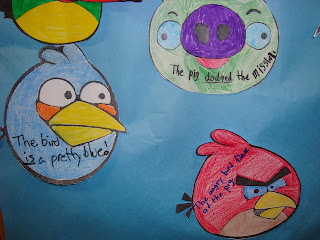 That is an awesome idea, and the door looks great! I'm a little upset I gave my final verb assessment today, and I'm moving my focus onto adjectives. I'll have to keep this in mind for next year (as long as the game Angry Birds stays popular). Thanks for sharing!

Being able to incorporate the angry birds and crazy pigs from a popular game adds fun to a lesson. The display looks wonderful. I wonder how long it will take to see similar displays appear in other schools if they see this post?

This is a fabulous idea! I am wondering if any of my teachers will try to use the idea for other subject areas and themes! Way to be transformative!
Peg Gillard
@gracinginfinity

Angry verbs is such a clever idea! I can't wait to share with others! The door decoration makes grammar come alive!

That looks like so much fun! I don't remember the learning process as being quite so colorful and relevant when I was in 5th grade...many, many years ago. This class is truly blessed with creative smarts! High fives all around!

Love this idea. My grade threes will get into creating angry verbs. Very fun!
We can't use the door idea. It violates our fire code. No paper on doorways.
Angie

This looks fantastic! I'm teaching verbs tomorrow and will happily borrow your idea! :)

My class loves Angry Birds. They are doodling them all the time. This is such a neat idea.

@treadinger - You could do something with adjectives also, what other kinds of Birds could they be if they weren't Angry?

Love this idea! Where did you get the bird template?

This is a fabulous idea. I am excited to implement this in my own grade 5 French immersion class. Thank you.
Mme.Dilka
Selkirk, Manitoba, Canada

I did this with my 4th graders this week and they loved it so much they were asking if they could stay inside during recess to finish it! "Well, if you really want to. . ." Thanks for sharing.
Paul in Portland @paulcolvin

Great idea! Do you mind if I "pin" it on Pinterest with a link to your blog?

Absolutely! Feel free to "pin" that and anything else you like on our blog! Thanks for visiting!

I'm SO glad your class enjoyed it! I hope they had as much fun reviewing verbs as my students did!

I'm glad you have plans to try use this idea for your French class! I'm sure your students will love something so fun and different! Good luck! :)

If you click on the link in the post, it will direct you to where I originally got the idea and the link to the bird template is there.

I love your idea of tweaking the Angry Verbs for adjectives! I'd love to know how you used Angry Birds in your class if you implemented it even at all.

I hope it goes well with doing the Angry Verbs with your students! I'm sure they'll have a blast while learning at the same time!

I hope it goes well with doing the Angry Verbs with your students! I'm sure they'll have a blast while learning at the same time!

Thank you so much! They are really a wonderful class and very creative indeed! :)

Thank you for your kind words! I wish the original idea was mine, but it wasn't. Feel free to click on the link in the post to see where I got the idea! It's so much fun to share ideas with each other and see how they work in other classrooms as well.

Thank you! Feel free to click on the link in the post to see where I got the idea! It's so much fun to share ideas with each other and see how they work in other classrooms as well. If the other teachers at your school do use the idea, I'd love to hear about it!

Thank you so much! I wish the original idea was mine, but it wasn't. Feel free to click on the link in the post to see where I got the idea!

With all the views the post has gotten just in a week, I'd also be interested to find out how many other teachers will have their students do something similar with Angry Birds....

Thanks for commenting, Ross!

That's a shame about how you've moved on from verbs, but maybe you could take Mr.Boyer's suggestions and implement the Angry Birds with adjectives instead. Another idea would be to wait a couple weeks, and use the Angry Verbs as a review, since students need refreshers every once in awhile (especially on identifying parts of speech).

Such a clever activity, Mrs. Allen! Love it! If you're still working on verbs, you might enjoy trying this activity I sometimes use during student writing workshops. I call it "Verballoons." It's on my blog:
http://stonestoop.blogspot.com/2008/02/great-school-visit-verballoons-and_5070.html

Cute idea! You should come link up!
Busy Bee Bulletin Board Linky

Great idead! Where did you find the angry bird graphics?

I love it! Using this today!
http://msbelsonsclass.blogspot.com.au

So glad to hear! Thanks for sharing your blog...can't wait to see pictures!

This will really help my students connect. My own boys have tons of Angry Bird Plush animals that I will use to make this display. Great idea!

You could have a ton of fun using the plush toys in some kind of review game! I can envision some kind of sit in a circle, tossing the birds, calling out verbs game.

Where did you get the angry birds and pigs? I need these to do this with my 7th and 8th graders.

Awesome! My students will really enjoy this! We are just really getting into verbs. Thanks for the idea! I've also played Vaudeville Verbs with my students in the past to get them interested in verbs. They have to stand in a circle and act out an action verb. Everyone in the circle continually repeats each action until all students have participated. They love it! Just an idea since I borrowed one of yours. Thanks again!

I teach a second grade ESL class in Seoul, Korea. My students are obsessed with Angrybirds, and this is the absolute perfect project idea for them. Thank you for posting!

Oh Thank you for sharing this great idea, my ESl students are loving it.

I teach Spanish K-7. I think this is a great way to inspire and motivate students. I am definately going to be using this asap.

Did your kiddos come up with the bird outlines as well, or did you provide those for them ?